Ice and Snow Control Mats and Treads - How to Order
Keep winter snow and ice where it belongs; everywhere but on your walkways

How to Order an Ice and Snow Control System:

The Ice and Snow Control System is available in rubber, which is usually used for residential or light to medium duty industrial and commercial applications, and in aluminum, which is for heavy duty applications such as the exteriors of public buildings, train stains, hospitals and anywhere where great numbers of users are anticipated. The aluminum elements are usually installed with the intention of their remaining in place year round.

Determine the type of application in terms of anticipated usage and whether the system is to be permanently installed or used seasonally. There may be times when a combination of the system elements may be employed, but that would be determined on a case-by-case basis.

2. What is the scope of the project?

Determine the dimensions of the area or areas to be covered. Large projects, such as train stations or municipal buildings may have multiple instances where Ice and Snow Control Systems will be needed. Such large projects may get acquired in phases over a duration of several years.

The system itself can also vary in width. The Ice and Snow Control Rubber Pathway Mats are available in 24" and 36" widths and in a variety of standard lengths. They can be made in most any custom length up to a maximum of 25 linear feet.

Sketch out the areas to be covered giving the actual dimensions of the existing pedestrian walkways. The use of graph paper to create a measured drawing that approximates the actual proportions and distances between levels and how the various areas are arranged in the field will go a long way to conveying that information.

Sketch 2. shows another area of the pathway to be covered. The change of direction and or the change in levels or heights will result in the need for separate Ice and Snow Control System units to be part of the customized arrangement. 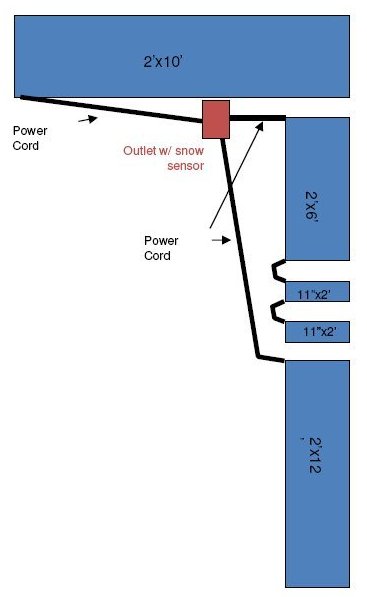 3. How will the system be controlled?

There are several ways that the Ice and Snow Control System can be controlled. In almost all instances, separate electrical installations will be required to connect the system elements to power. The use of extension cords is inappropriate from the point of view of safety and also that it reduces the effectiveness of the units.

The actual engaging of the system or turning it on and off can be accomplished in several ways:

a. An electrical switch that controls the power to the Ice and Snow Control System or to a particular section of the overall system can be installed and used to manually turn on the units when the weather report calls for ice and snow conditions and to manually turn off the system when the event has past.

b. An in-line Thermostat can be plugged into the 120V outlet that controls the Ice and Snow Control System and then the Ice and Snow Control System elements can be plugged directly into the back of the Thermostat unit(s). These units would turn on the mat or mats automaticly as soon as the ambient temperature falls below 38°F (3°C) and then shuts the power to the mats off when the temperature rises to 50°F (10°C). Please Note: The in-line Thermostat has a power indicator light that glows when the thermostat is energized. It is designed only for use with 120V products and is capable of handling up to 15 Amps.

c. The combination of a Snow Sensor unit and a Snow Sensor Controller unit can be installed to automatically control the Ice and Snow Control System by "sniffing" the air to determine when a snow event is approaching, turning on the system by itself and keeping it on until an hour after the snow conditions have abated, when the syem controller would automatically turn the system off.

There will need to be a written plan by which a local electrician can determine what kind of service needs to be installed to accomodate the Ice and Snow Control System being ordered. Please feel free to submit the detailed needs of your residential or industrial application as described above and we will be pleased to prepare a formal quotation and propossessed system layout for your consideration. Please include your name, company name, contact phone, Fax and e-mail address, destination city state and Zip Code for the shipping part of the quotation and all the details of the system requirements as discussed and outlines above.